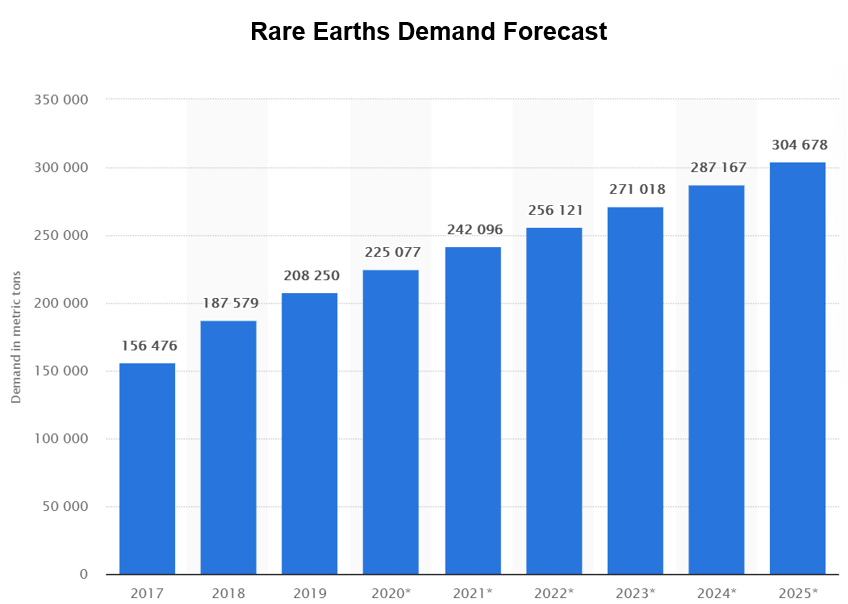 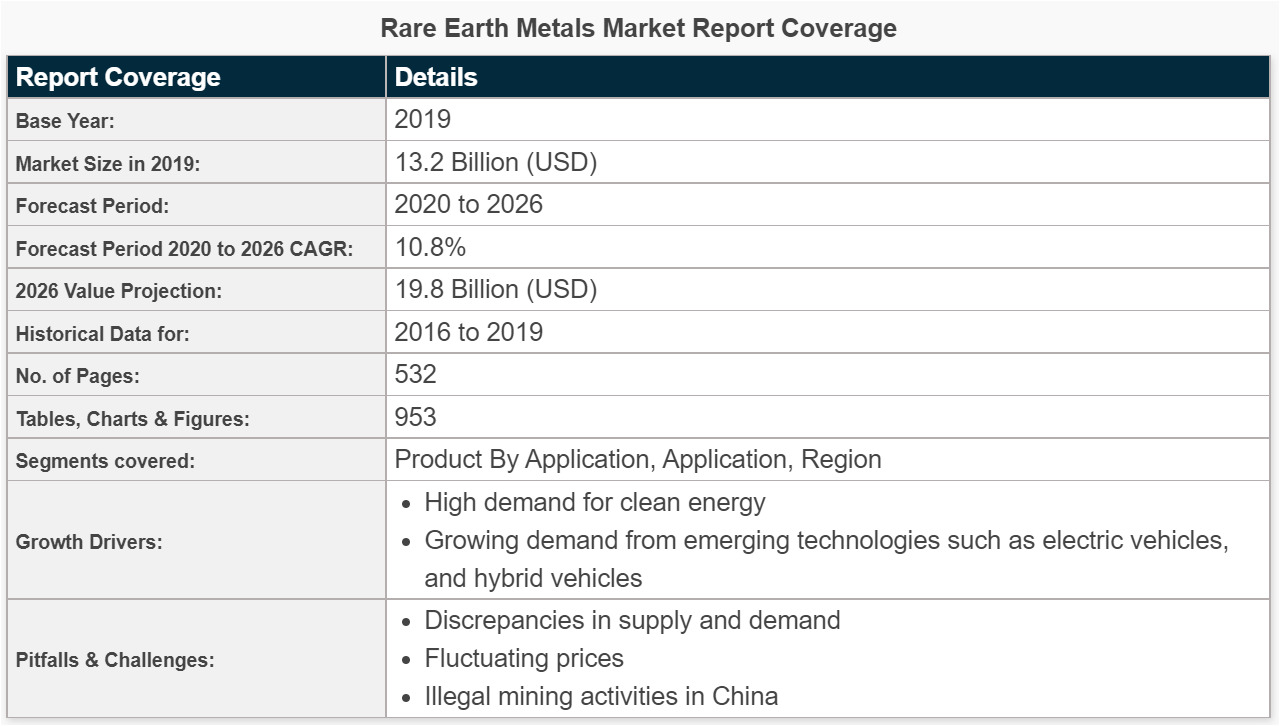 Rare earth elements (REEs), which are required for the manufacture of cell phones, wind turbines, and electric vehicles, have risen in importance as demand for electronics and electric vehicles continues to rise. Furthermore, rare earths are important for national security and commercial purposes. REEs are vital in the manufacturing of powerful permanent magnets, which are required for cell phones to vibrate or electric vehicles to supply power. However, severe supply chain difficulties have arisen with REEs, which is especially concerning given the military's requirement for REEs. A F-35 fighter jet, for example, carries almost 500 kilos of rare earths. The United States used to be a major producer of REEs, but Chinese REE producers steadily pushed American miners out of business, and today China controls more than 85% of global production and dominates practically every stage of the global REE supply chain.

Rare earth elements (REEs) have become more important as a result of recent technological advancements, and their distinctive physical and chemical properties have encouraged the development of more new technological uses. Renewable energy applications like wind turbines and hybrid cars attest to the future demand for permanent magnets in this area.

The rare earth market has certain well-defined drivers and restrictions. The growing interest in renewable and sustainable energy has boosted demand for rare earth magnets, which provide superior performance when compared to other magnets. For example, constructing engines and generators in a typical 3MW breeze turbine necessitates roughly 600 kg of rare earth.

Rare earth elements are currently being used to make catalysts and magnets for automobiles, thanks to the growing automobile industry. Furthermore, growing environmental concern about rising CO2 emissions from gasoline-powered vehicles is driving up demand for electric vehicles around the world. Many REE-based permanent magnets, such as neodymium and praseodymium magnets, are used in the manufacturing of high-efficiency batteries in these electric cars.

The market for rare earth elements is also being driven by the implementation of strict rules requiring the mandatory installation of catalytic converters in automobiles to reduce emissions. Aside from that, the expanding usage of REEs in the manufacture of turbines, reactors, generators, transformers, and other modern energy generation facilities is stimulating the use of REEs in manufacturing turbines, reactors, generators, and transformers. Furthermore, the rising popularity of smart electronic gadgets such as LED/LCD TVs, smartphones, laptops, smart wearables, and other similar products is boosting demand for REE-based components. Furthermore, the development of fiber optics is accelerating the use of rare earth elements such as neodymium, erbium, and holmium in the production of high-efficiency fibers.

From quantum computing and material sciences to medicinal applications and green technology advancements, rare earth elements are set to play a vital role in our future. They are critical in efforts to cut greenhouse-gas emissions to levels low enough to avert the worst effects of climate change. The demand for neodymium and dysprosium, which are used in wind turbine motors, will continue to rise as the number of wind farms grows. As people switch from internal combustion to electric vehicles, demand for rare earth magnets and batteries will rise.

Mining corporations have proposed establishing new mines and processing units in several places of the world to meet future demand. Deep-sea mining and collecting rare earths from acidic wastewater pouring from abandoned mines, for example, sound like science fiction. However, if a huge rise in demand drives up prices or if governments opt to subsidize production costs, these manufacturing strategies may become economically viable.

For many years, rare earth elements and other strategic metals have played a small but vital role in our daily lives. Rare earths have been a vital contributor to technological developments since the advent of rechargeable batteries in the 1970s and the introduction of the first iPhone in 2008, and the sector has only grown since then. We feel that now is an excellent time to investigate investment potential in this field, given recent changes in geopolitical interests and environmental applications of key metals. As we adopt more and more sustainable energy sources around the world, electrification and climate change technologies are unquestionably here to stay. Desire will only rise as a result of government regulation (push) and customer demand (pull).

A combination of batteries and electric motors is used in all electrification processes across all markets (electric automobiles, wind turbines, drones, etc.). Because battery technologies are varied and subject to quick change as a result of innovation, it is difficult for manufacturers to choose one that is consistent. Electric motors, on the other hand, are consistent and have limited substitutability because the permanent magnets used in their manufacture all require REEs.

China now supplies 85 % of all REEs and permanent magnets; however, the present REE supply will be insufficient to cover half of the predicted EV demand within 10-15 years, much alone any other end markets. As a result, the market is supply-constrained, which will likely lead to price increases.

There are 16 rare earth elements (REEs), 15 within the chemical group called Lanthanides.

Two distinct categories based on atomic weight are as follows:

The distribution of components varies by deposit. In many situations, they have no substitutes and are therefore vital.

The "green" tech economy is based on rare earths: 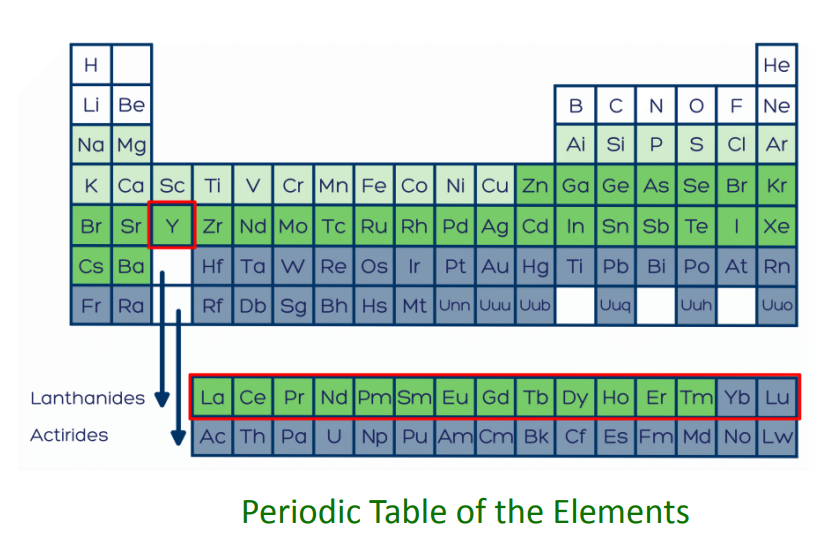