The Use of Rare Earth Elements

The Mountain Pass Mine in California's the Mojave Desert, near the Nevada border, was built in response to a search for uranium deposits in the United States. The mine's uranium and thorium resources were not useful, but its rare earth element deposits were. The mining and separation factory extracted europium in the early 1950s, which was utilized to make red phosphors for newly invented color television technology. Later, cerium, lanthanum, neodymium, and praseodymium were added to the mix.

During the Cold War (1945–1991), the arms race between the United States and the Soviet Union resulted in massive increases in government-funded research and development in a variety of fields, including rare earth elements. In the 1960s, researchers from the United States Air Force created samarium-cobalt magnets. Even when extremely hot, this material maintained its strong magnetic characteristics, allowing for more powerful radar sensors. Scandium was employed by Soviet metallurgists in the 1980s to make aluminum tougher and lighter, which improved the performance of MiG-29 fighter jets. Laser research led to the creation of yttrium-aluminum-garnet lasers, which are utilized as laser rangefinders or target designators in guided weapons. 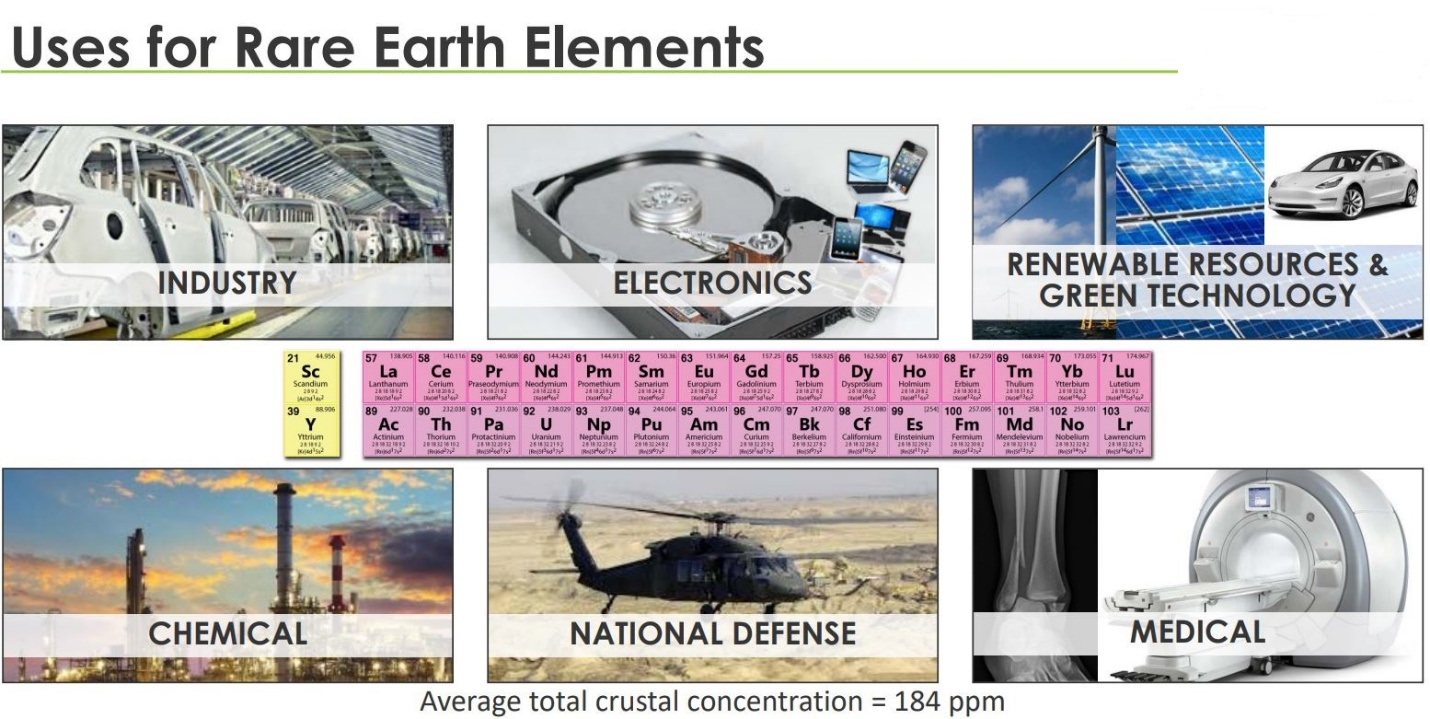 Consumer items incorporating rare earth elements were developed as a result of corporate and industrial research. The nickel-metal hydride battery, which used lanthanum and neodymium, was developed as a result of battery research in the 1970s and 1980s. These batteries may be recharged multiple times while still carrying a significant amount of energy for their size (size). In the 1990s, they became popular for use in portable gadgets like video cameras, and they were widely utilized in hybrid cars like the Toyota Prius, which debuted in 2001. In the 1980s, GM researchers developed neodymium-iron-boron magnets and founded Magnequench, a firm that manufactures the lightweight, powerful permanent magnets used in power windows and door locks, windshield wiper motors, and electric engine starters. As personal computers became more common in American homes and companies during the 1990s, Magnequench developed a lucrative market supplying tiny magnets for computer hard drives.

During the 1990s and 2000s, the use of rare earth elements in electronics grew. Bell Labs developed the erbium-doped fiber amplifier to amplify the signal in fiber-optic cables in the early 1990s. These little devices allowed for the creation of a global network of long fiber-optic cables that cut the cost of long-distance phone calls and today transport internet data throughout the world. The introduction of the first iPhone in 2008 demonstrated how far rare earth metallurgy and applications had progressed. Lanthanum is used in smartphones to reduce distortion in their tiny glass camera lenses, neodymium magnets to improve the sound from tiny speakers, and yttrium and erbium phosphors to produce bright colors in an energy-efficient screen.

We are even more reliant on REEs today. The unusual chemical properties of REEs are responsible for many of the electrical devices and technical applications that have come to define the early 21st century. REE components are used in hybrid automobiles, rechargeable batteries, wind turbines, mobile phones, flat-screen display panels, fluorescent light bulbs, laptop computers, disk drives, lasers, and catalytic converters. The use of REEs in the production of powerful permanent magnets is currently the highest-value commercial application of REEs (praseodymium and neodymium are the principal REEs used in the process, plus small amounts of dysprosium and terbium).

These magnets can be utilized in electric motors to increase power and torque, allowing motors and engines to be significantly smaller and lighter in weight. As oil and gas stocks deplete, hybrid engines will take on a larger portion of the energy burden, increasing our reliance on REEs. A slew of political pledges has been made, some of which call for the deployment of technology, including REEs in some form. Hard disk drives, such as those seen in mobile devices, can also be miniaturized thanks to REE magnets.

REEs – primarily europium, terbium, and yttrium – are used as phosphor compounds in the majority of energy-efficient lighting and display panels. This is a fast-growing industry, with LED screen producers accounting for the second-largest commercial REE market. There are many other possibilities. A mixed REE alloy is utilized in the nickel-metal hydride (NiMH) rechargeable batteries used in hybrid cars and countless other electrical items (mostly lanthanum). Cerium is used as part of the catalyst in catalytic converters to convert NOx to innocuous Nitrogen, Oxygen, and harmful CO to CO2. Fluid-cracking catalysts, which are increasingly being utilized in the petrochemical industry to improve the efficiency of the refining process, contain REEs — usually lanthanum.