At current FOB (Free on Board) China pricing, Ce and La account for ~9% of project revenue.

Five rare earth elements are expected to be in limited supply:

These five essential rare earths account for ~64% of the site's in-ground value. With 45% of the in-ground value, Neodymium is one of the biggest contributors. 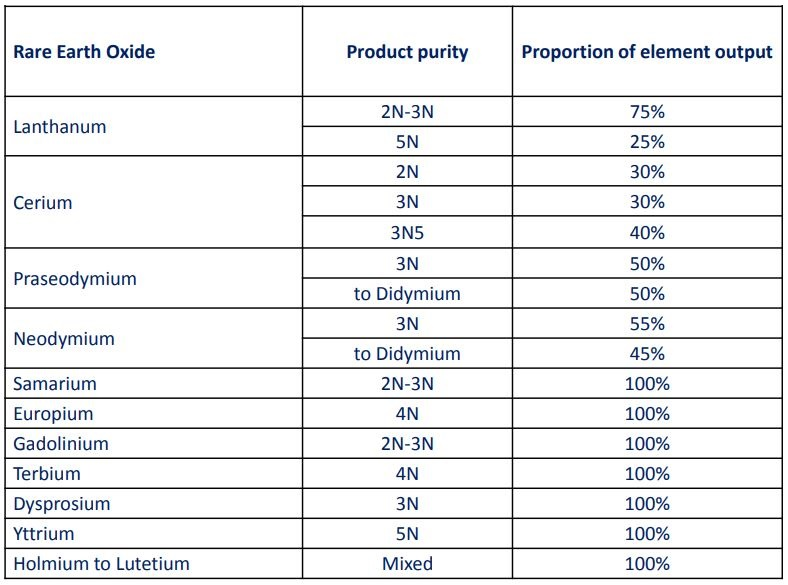 A REE-enriched carbonatite deposit is the target deposit type at the Lushan site. Carbonatites are intrusive and extrusive igneous rocks that contain more than 50% modal carbonate minerals, according to standard definitions.

Carbonatites are almost exclusively associated with continental rift-related tectonic settings and typically occur as plugs or pipe-like structures inside zonal alkalic intrusive complexes, or as dykes, sills, breccias, and veins. They are distinguished by an aureole of metasomatically altered country rocks, commonly known as fenites. 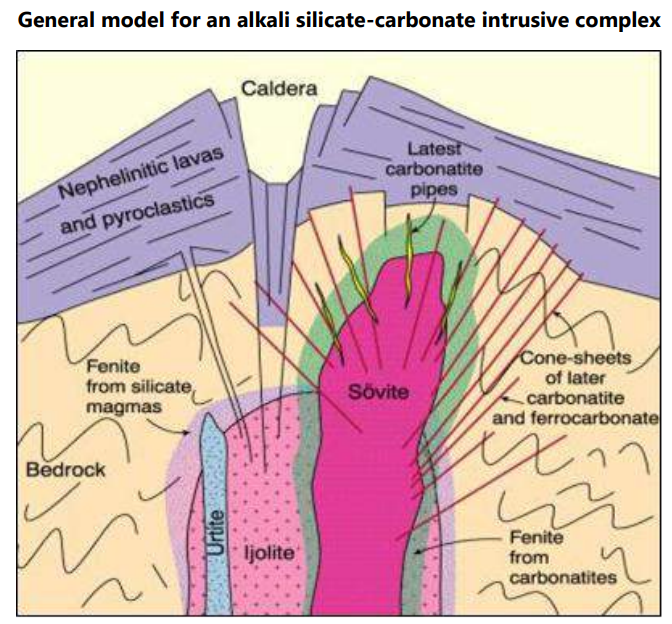 The carbonatite deposit is considered to be part of the phonolite feldspathoidal syenite association since it is spatially connected with the huge nepheline syenite intrusion.

Carbonatites can be generated by:

It is probable for all three mechanisms to be involved in the evolution of carbonate magmas. Carbonatites are composed of various phases of intrusions that typically progress from early magmatic calcite-rich carbonatite to magnesium-rich dolomite carbonatites, and lastly to late-stage iron-rich carbonatite phases, as a result of crystal fractionation within the intrusion. Carbonatites are anomalously enriched in the highly incompatible REE and high field strength elements (HFSE) as a result of their petrogenesis, and this enrichment can lead to profitable REE concentrations.

The project undertook two diamond drill campaigns totaling 266 drill holes at the Lushan site during 2020 (Stage 1) and 2021 (Stage 2) to evaluate the REE potential of the deposit and develop a Mineral Resource Estimate.

Drilling programs were carried out in accordance with tight industry standards as part of a thorough set of operating procedures. From April to June 2020, the Stage 1 drilling program was carried out with HQ/NQ (63.55 mm / 47.6 mm) core barrels on a track-mounted Boart Longyear drill rig. The goals were to validate the breadth and tenor of mineralization discovered during prior drill operations, as well as to see if mineralization spreads beyond the borders of previously discovered mineralized zones. 266 drill holes, 187 vertical holes, and 72 inclined holes were drilled on 90° and 270° azimuths at inclinations of -55° and -65°, respectively, and 7 holes were made on 045° azimuth at -75° inclination. The depths of the boreholes ranged from 86 meters to 302.2 meters. Drilling totaled 17,881m, with 2118 samples collected for geochemical analysis.

The Stage 2 diamond core drilling program was carried out between January and May 2021. A Caterpillar 329D hydraulic excavator was used to pull the track-mounted rig into place on each drill pad. Stage 2 focuses on infill drilling and expanding the region of known mineralization discovered during Stage 1, especially at depth.

Aluminium, silicon, potassium, and calcium were identified to be the primary geochemical discriminators of lithological variation in the Lushan deposit. The final indicator was calcium, which produced a good separation with the same accuracy and resolution as if all four discriminators had been utilized. The geological model derived from geochemistry provides a good framework for interpreting the deposit's geology. The model is regarded as a valuable tool for describing the structure of the primary ore body since it provides an estimate of the shape and extent of the carbonatite at depth.

3D model of the ore body, open at depth. The green body represents the carbonatite intrusive complex and is based on all drill core samples containing >12% calcium. 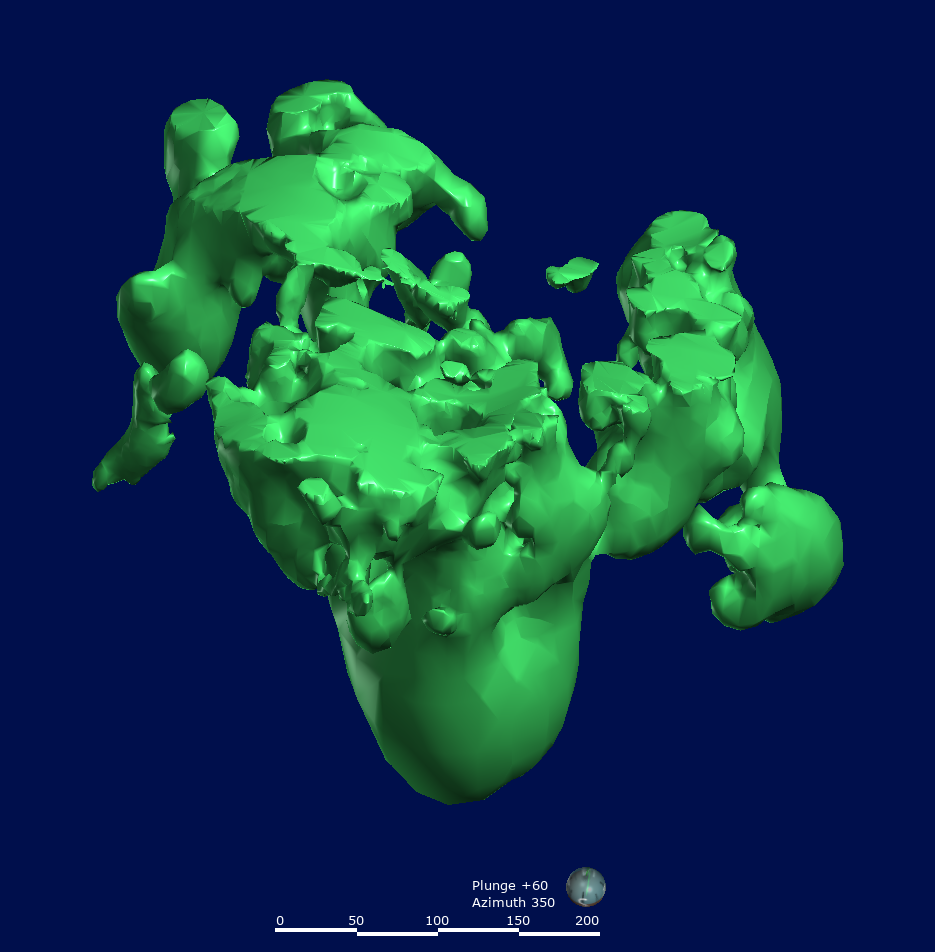 Drilling was accessed on the site via a network of roadways built specifically for that purpose. A well at the exploratory camp location provided water for drilling. Water was pushed from the borehole into a 50,000-liter aqua-dam at the site's base, then pumped through heavy-duty pipes to a second 50,000-liter aqua-dam at the site's top, and finally gravity fed to the drill rig. A geologist from Lushan's exploration team used a handheld GARMIN GPS unit to locate all boreholes using UTM Zone 36S projection and WGS84 Datum. Wooden pegs were used to mark the proposed collar placements, and spray paint was used to outline the azimuth.

The alignment of the rig was examined by the site geologist prior to drilling to ensure proper rig setup. A Brunton compass was used to measure the inclination on the derrick. The geologist checked azimuths with a compass clinometer that was corrected for local magnetic declination. All holes were re-surveyed using DGPS equipment after each drilling session was completed. The drilling was continuously monitored by local geologists to ensure optimal recovery. Wire-line methods were used to collect core, which was then cleansed by a member of the drill crew before being placed in a steel core tray. The borehole name and box number were written on core trays ahead of time and placed near the drill rig.

The drill core was consistently put in each tray from left to right, pointing down the hole. At the end of each run, plastic depth marker blocks were placed, and the actual drill depth, based on the number of rods in the ground, as well as the length of the recovered core, was recorded on the depth blocks.

Before the trays were transported to the exploration camp, the site geologist has undertaken detailed core recovery measurements. The site geologist supervised the removal of filled core trays from the drill site twice a day. Trays were wrapped in blankets and fastened in a pick-up vehicle with ratchet straps before being driven to the exploratory campsite. Drill collars were capped and marked with a concrete slab when the holes were completed, with the essential information written on a metal plate.

Strong financial position and no debt.

Our approach to environmental management is based on the robust identification, assessment and management of risks across all Project phases, including exploration, development, operation and closure. At the mine site it is applied a Risk Framework to identify and manage environmental risks.

We recognize that environmental performance is an integral part of our business and our Environmental Policy guides our approach.

We are committed to ensuring that the health and safety of our employees and contractors are key aspects in our decision-making process. We strive to achieve the highest level of performance via fit for purpose risk-based systems and management practices. Our goal is to ensure a safe and healthy working environment with ‘zero’ work-related injuries or illnesses.

Safe work methods and practices are encouraged by establishing responsibility and accountability amongst employees and contractors. Our health and safety management systems and processes define clear expectations around visible leadership, as well as our commitment to ongoing training and employee development.

We encourage positive, proactive safety awareness and instill a culture of continuous improvement across the organization. We regard the safe completion of this Project to be of the highest priority and have developed a set of standards that apply to all persons and contractors who conduct work for, or on behalf of our company.

These standards set the minimum expectations and ensure continuity across our business, while at the same time allow contractors the flexibility to work under their own health and safety systems.

At the mine site there are low levels of uranium and thorium contained in the mineralisation, which is a common occurrence for rare earth deposits. The anticipated average mineralised material mined for processing, the tailings, waste rock and the final product exported will all have radionuclide levels below the international definitions of a radioactive material. While low, this occurrence is still managed through a formal Radiation Management Plan with specific monitoring and reporting procedures.